At the inauguration, the participants were addressed by Prof Valentin Bucik, Dean of the Faculty of Arts, Mr Zoran Janković, Mayor of the Municipality of Ljubljana, Prof Radovan Stanislav Pejovnik and Dr Stojan Pelko, State Secretary at the Ministry of Culture of the Republic of Slovenia. The programme was enriched by Nagisa Moritoki, PhD, and the concert presented by the students of Chinese from the Department of Asian and African Studies of the Faculty of Arts, University of Ljubljana.

In the year when Ljubljana was the World Book Capital, the idea of a new book fair came to life, which allowed the publishers of scientific and expert publications to present themselves to the broader public. Along with university faculties from all over Slovenia, the Faculty of Arts created Liber.ac, an academic book fair that received favourable reaction. The fair hosted 25 exhibitors and was held in Foerster’s Garden from 19 to 21 May. The accompanying programme, intended for the broader public, was marked by Eastern Asia. Special attention was drawn to the presentation of Japanese and Chinese literature, including the youngest participants, who were able to get acquainted with this world through fairy-tales and workshops in which they created their own books in the Japanese style and got to know Chinese calligraphy and Korean Hangul writing. Visitors to the book fair participated in traditional Japanese tea rituals and Asian dances, but they were also introduced to Eastern Asia through the lenses of an artist’s camera. The accompanying programme ended with a multimedia stage play by the students, titled The Dangerous History of Yellow Danger, performed at Cankarjev dom. 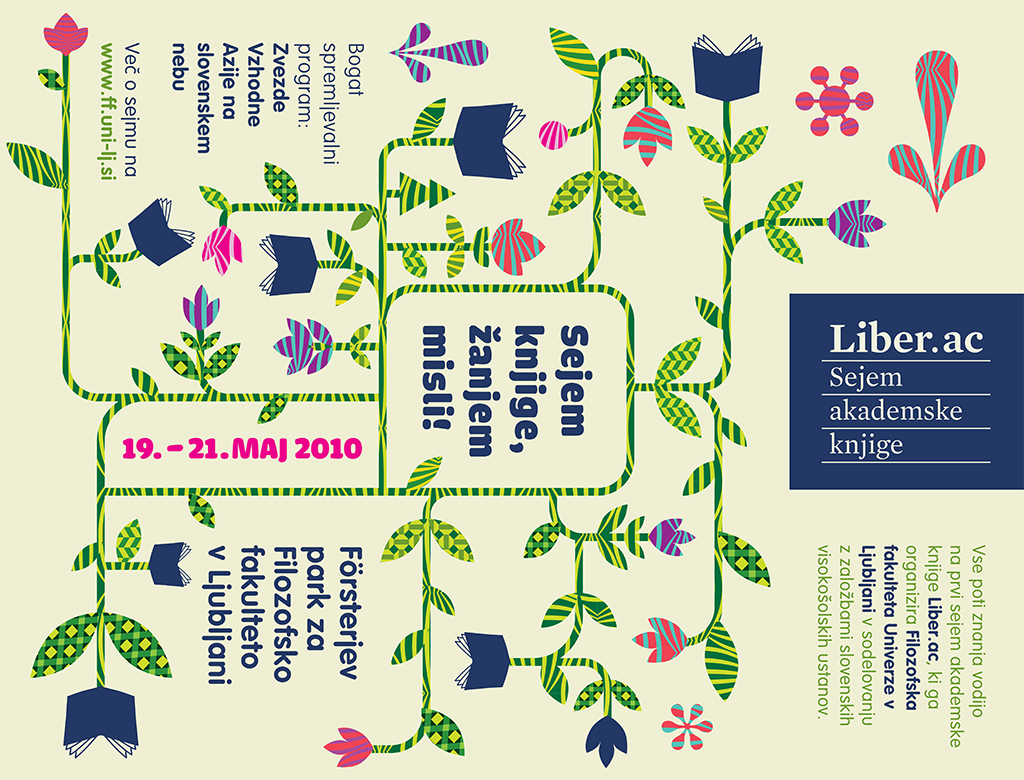 From May 24th – 26th, in Foerster’s Garden behind the Faculty of Arts, it was possible to browse through interesting publications of various professions, sit with a book in hand in the shadow of lush trees and see what the rich accompanying programme of the book fair event brought up. The cultural programme was titled Romance Old New World and visitors interested in the literature and art of France, Italy, Spain and other countries of the Romance world could attend dance and theatre events at their leisure, literary recitals, film projections, free workshops for children and adults, exhibitions and many other happenings. Round-tables were held on subjects, such as electronic books in academic publishing, translating Romance literature into Slovenian and the role of sociology. The central guest of the fair was Mojca Širok who spoke about her books and presented the phenomenon of Berlusconi to the broader public. 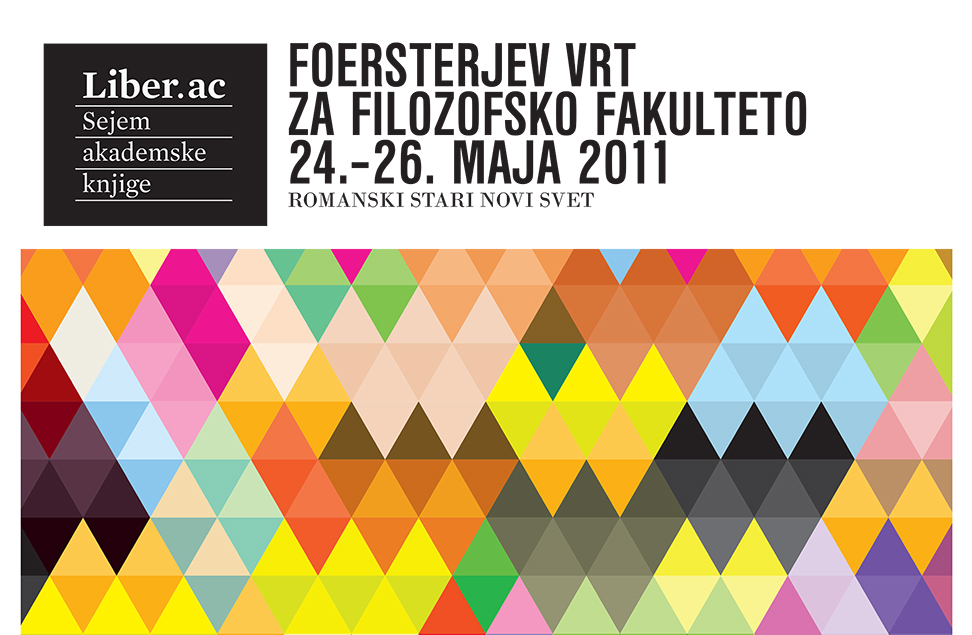 Research Centre of the Slovenian Academy of Sciences and Arts

The 3rd Liber.ac Academic Book Fair was held in the pleasant greens of Foerster’s Garden behind the Faculty of Arts in Ljubljana and presented the newest editions of the Slovenian press of higher education from all the fields of science and art as well as the publications of major Slovenian publishing houses that weren’t part of the higher education system, but have quality programmes in the field of scientific publishing. The book fair drew attention to the variety and high quality of Slovenian academic production and the newest scientific achievements and interdisciplinary directions in development. It attempted to bring scientific books closer to the broader public, students, pupils and those who opted to attend university later in life. The accompanying cultural programme, titled Magic Slavic Lands, was dedicated to the literary and cultural creativity of Slavic nations, but the book fair also introduced subject matter associated with books in contemporary society. 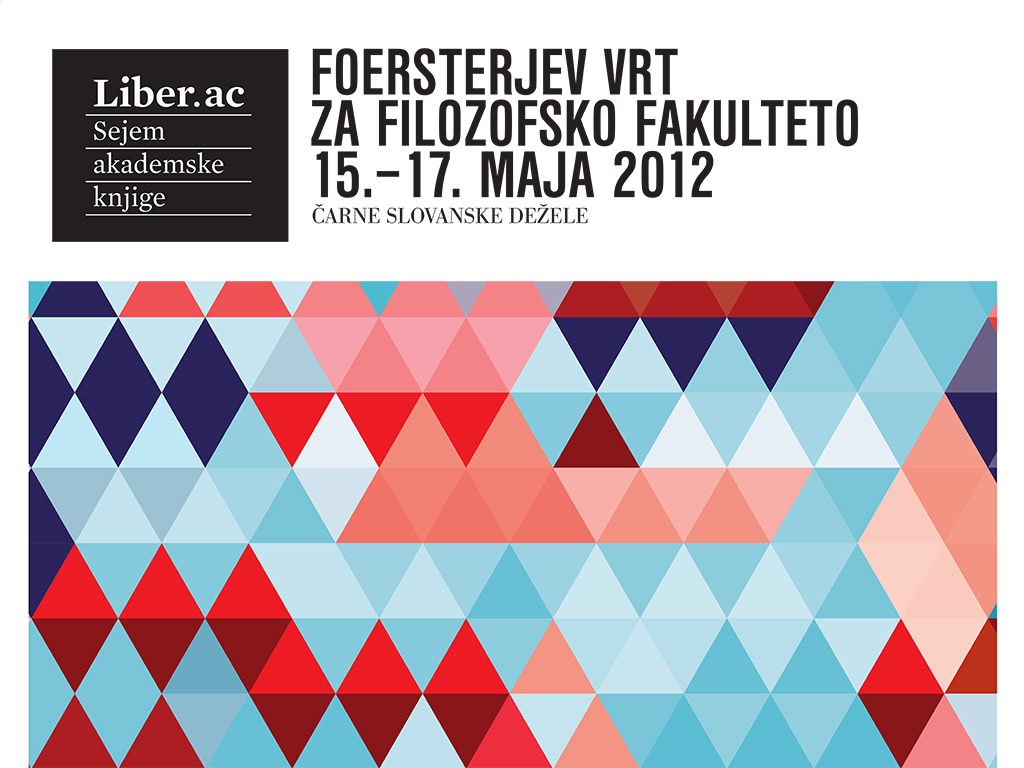 The 2013 book fair, held under the auspices of the Municipality of Ljubljana, brought together the languages and literatures of Germanic countries – Switzerland, Austria, Germany – but Dutch and Swedish were also spoken. Other Germanic languages – Danish, Norwegian, Icelandic, Frisian, Faroese and Afrikaans – were also presented to visitors in an innovative way. The accompanying programme, titled Germanic Babylon, conceived by the Department of German, Dutch and Scandinavian languages and assisted by the Ljubljana University Press, the Faculty of Arts Book Store and the Central Humanist Library at the Faculty of Arts, comprised round-table discussions, concerts, translation recitals, drama performances, literary readings, exhibitions and workshops for children. Thirty-eight exhibitors were present at the 2013 book fair. 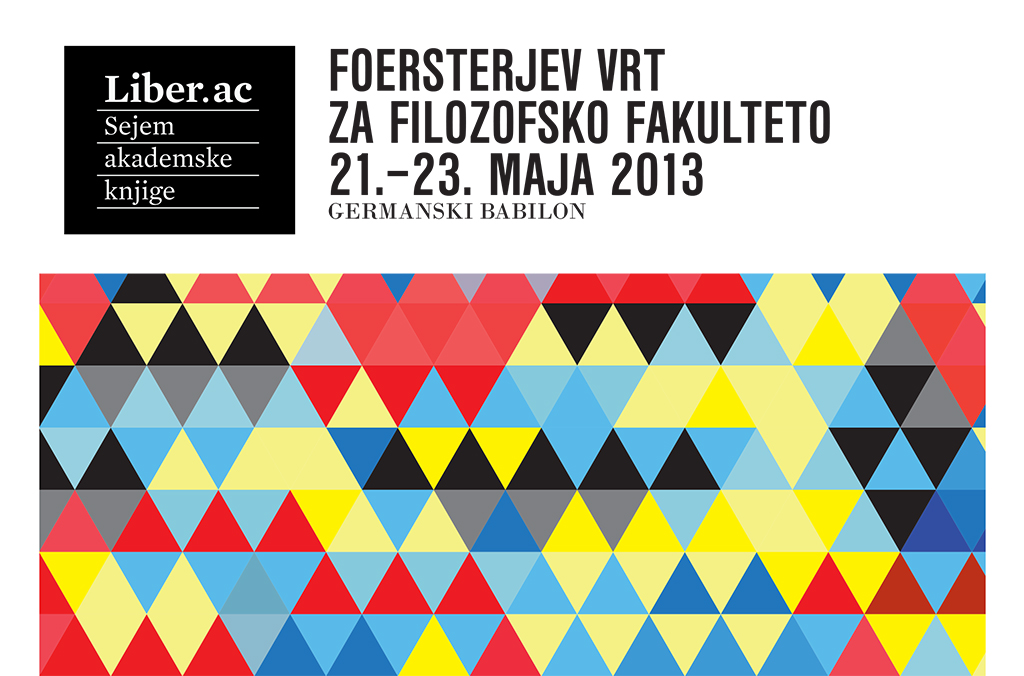 In 2014, Ljubljana celebrated 2000 years of Emona and the Liber.ac Academic Book Fair celebrated its first five years. From the 20th to the 22nd of May, in the immediate vicinity of former temples, the forum and the antique basilica, the streets were lively again. In the Foerster’s Garden behind the Faculty of Arts, one could meet writers, poets, illustrators and translators. With words, music and images, it was possible to travel from Emona all the way to the coasts of the magical Avalon and further onward in search of a new world. In workshops, children got to meet Jason and the Argonauts, teenagers could listen to poetry in English and adults, to critical words of committed literature. Just a stone’s throw from the now Roman road, the visitors participated in more or less serious quizzes to test their broader knowledge, round-tables were held on socially critical themes, travelogue lectures took place and visitors were given the possibility to browse through a rich offer of scientific and academic books at individual stalls. Ancient Romans were already aware of the importance of a healthy mind and a healthy body – at Liber.ac, the visitors could exercise both. 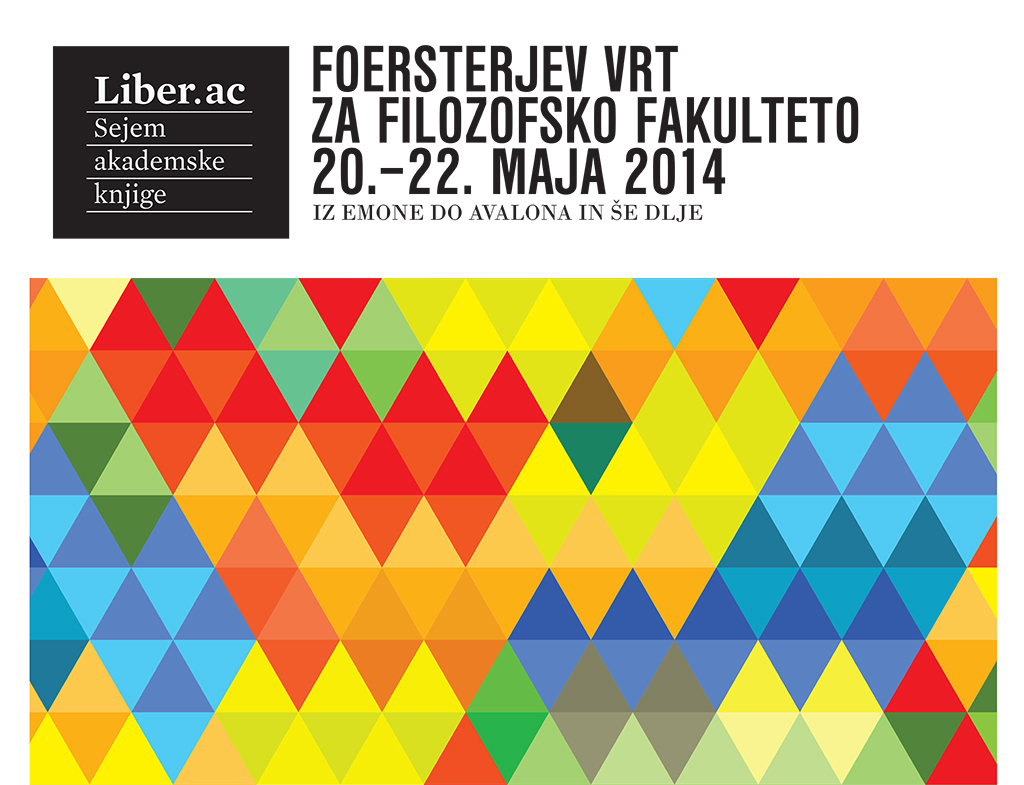 The Academic Book Fair Liber.ac is a three-day event with an accompanying programme that introduces a new type of book fair in the Slovenian space and establishes a new cultural and communication centre. The book fair associates various agents from the fields of production and promotion of academic books extending from university press to bookshops and university libraries. It draws attention to the variability and high quality of Slovenian academic press, the newest scientific achievements and interdisciplinary directions in development in higher education. It also aims to bring academic book closer to broader public, students and pupils deciding on the future studies as well as those who aim to get a university degree later in life. 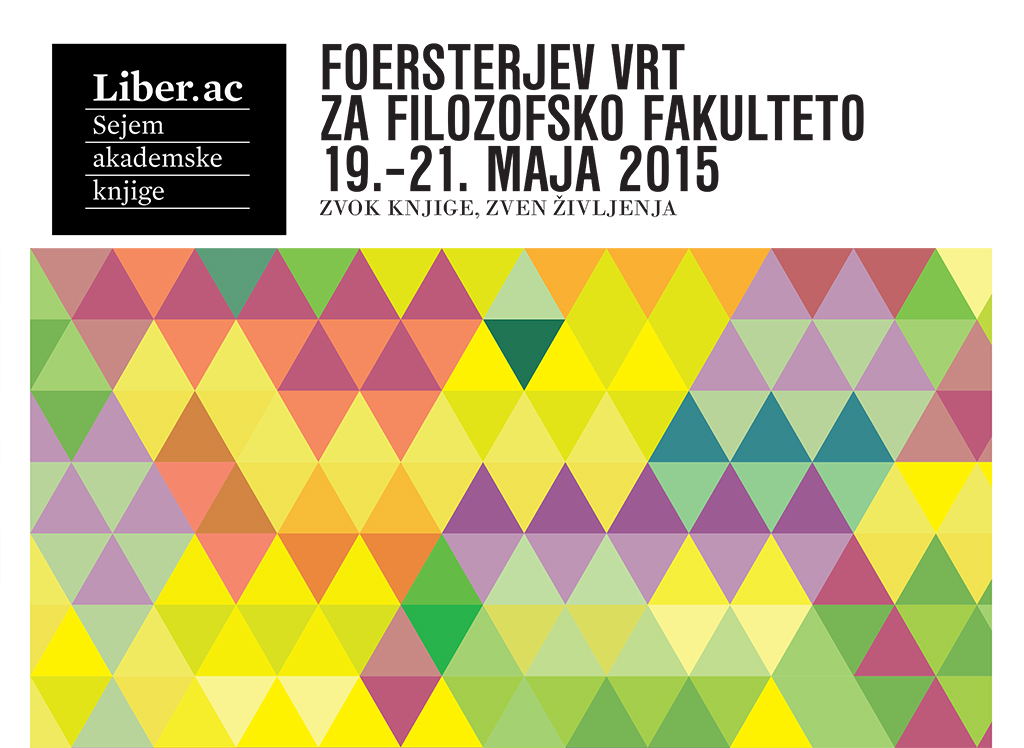 In 2016, the Faculty of Arts of the University of Ljubljana organised the Liber.ac Academic Book Fair, which took place in the Foerster’s Garden from the 24th to the 26th of May. The exhibitors presented and offered new publications from the field of the academic press. The accompanying programme was marked by the 20th anniversary of the Department of Asian Studies of the Faculty of Arts, titled Journey to the East. The highlight was a performance designed as a satirical allegory of a popular traditional Chinese story Journey to the East. The original story traces the pilgrimage of Buddhist monk Xuanzangu, who is on his way to India, accompanied by three companions, in search of precious sutra that will help people out of ignorance. Parallel to this story, the staff and students of the department played out various motifs that attracted  Western people to East Asia. Two extraordinary experts on the region, long-time correspondent from Beijing, Zorana Baković and renowned Chinese philosopher Wu Xiaoming, discussed China as a source of wisdom and a new centre of power. The music and dance programme was also of great variety. In The Samurai from Kuroda and other Japanese Folk Songs, the lover of traditional Asian wind instruments, Florence Gacoin-Marks, played the Skakuhachi, a Japanese flute, while students in Japonology told stories about hard labour in mines, river rafting and the tragic destinies of the male and female characters. At the final concert, titled The Orange Globe, Jana S. Rošker sang classical Chinese lyrical poetry set to jazz melodies and translated into Slovenian. A special spectacle was cosplay – a fashion catwalk of popular characters from manga and anime. The visitors could experience the culture of Eastern Asia in a rather direct way – by taking part in a Japanese tea ritual, putting on a traditional Korean dress, called a hanbok, and learning how to properly bow. Of course, the stars of the fair were the books: in highlight were authors devoted to research on Asian, Islam and migrations, literary translators of the languages of Eastern Asia and other literary creators and theorists. 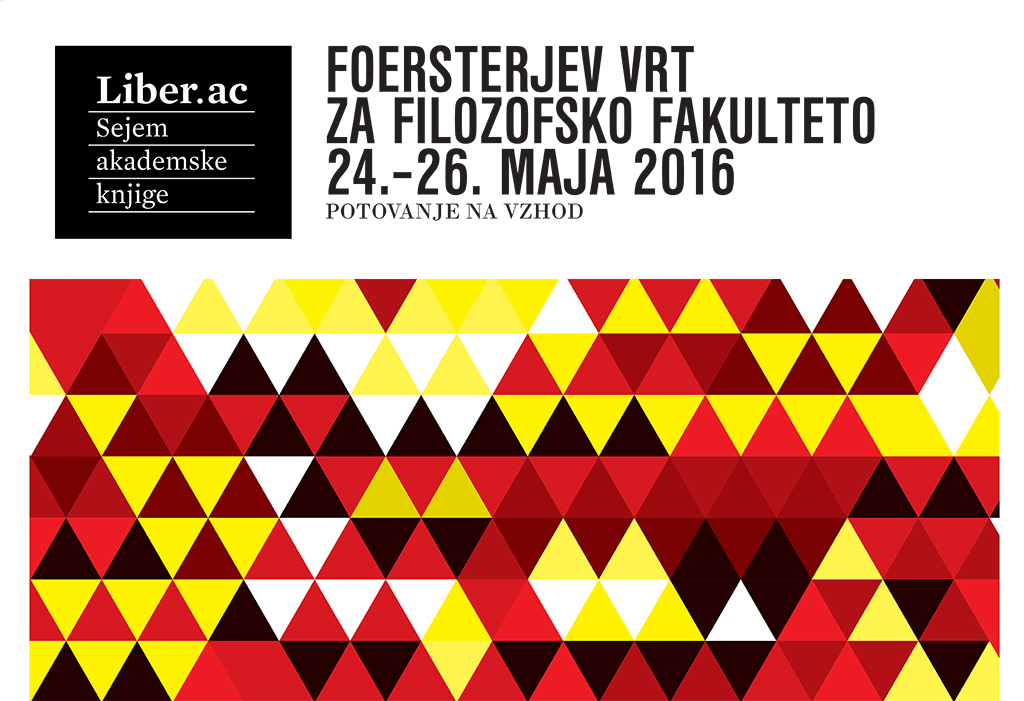 Organised by: the programme accompanying the 20 year anniversary of the Department of Asian Studies at the Faculty of Art was organised in cooperation with the Ljubljana University Press, the Book Store, the Central Humanist Library, the Physical Education Division, the Student Choir and the Octet and Symphonic Orchestra of the Faculty of Arts. The programme was diversified by the Taiwan Study Centre, the Department of Musicology at the Faculty of Arts, the International Council for Traditional Music, the Embassy of India, the Confucius Institute Ljubljana, the Savsko naselje Elementary School, the Shodokan Association, the Shubukan Association, the Touhou Association, the Slovenian Cinematheque, Cankarjev dom, the Slovenian Association of Taijuquan CSN, the Taijiquan Institute, Shaolin Temple Ljubljana and the publishing houses presented at the book fair.

The Faculty of Arts at the University of Ljubljana organised the Liber.ac Academic Book Fair, titled Kdo je tebe, Praslovan …* for the 8th year in a row. The book fair took place from May 23rd to 25th in Foerster’s Garden behind the Faculty of Arts and hosted exhibitors from all over Slovenia. The presentation of the academic publishing activity was accompanied by a rich accompanying programme planned by the Department of Slavistics at the Faculty of Art. All the events were free of charge. 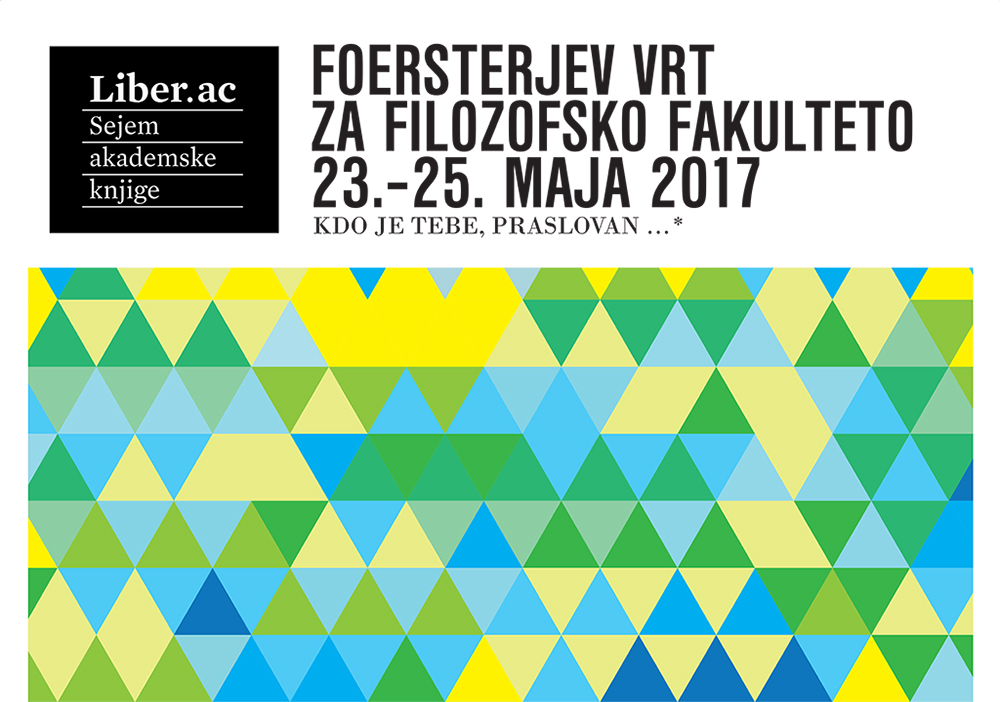 From the 22nd to the 24th of May, the Faculty of Arts of the University of Ljubljana held the 9th Liber.ac Academic Book Fair, where 37 exhibitors were presented. The accompanying programme, titled Translating Worlds, under the auspices of the Ljubljana University Press at the Faculty of Arts, was prepared by the Department of Translation Studies at the Faculty of Arts. A great number of Slovenian and foreign guests were in attendance and presented various perspectives of multilingualism: migrations due to social and climate changes, multilingualism in the (digital) future, language technologies and machine translation, subtitling and dubbing, etc. A great deal of the programme was focused on literary translation, so renowned translators and authors were presented, among them: Goran Vojnović, Miha Mazzini, Andrej E. Skubic, Evald Flisar, Boštjan Gorenc – Pižama, Jakob J. Kenda and others. Along with the book fair activities, a symposium was held on open access in the humanities with numerous Slovenian and foreign experts. 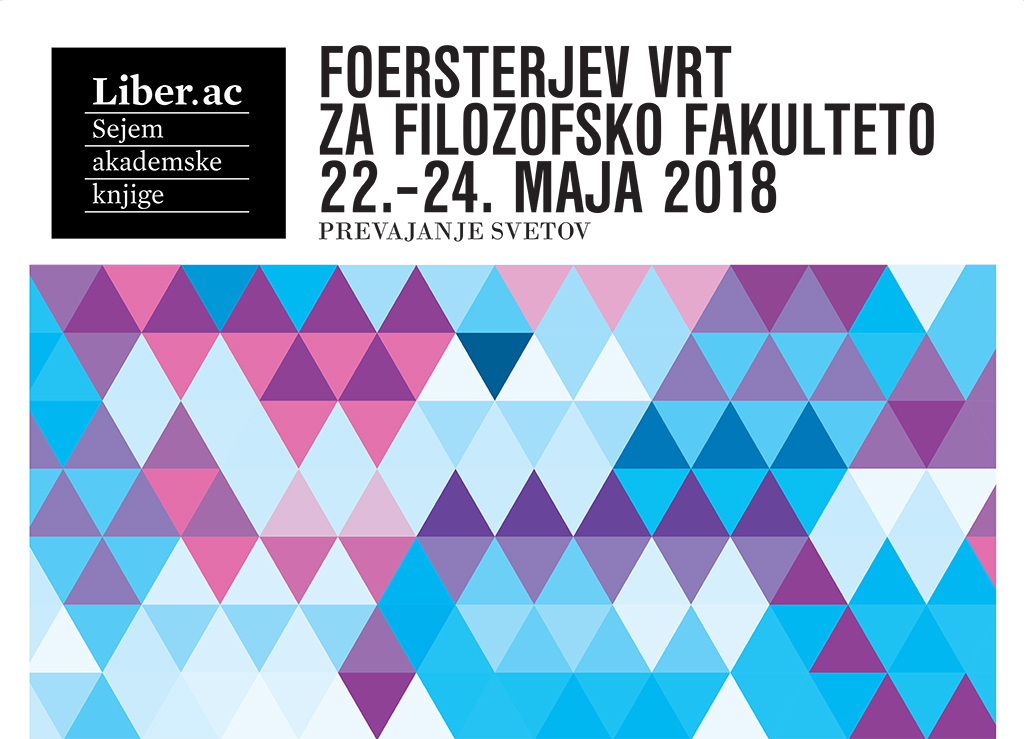